This is a video of the song “Jindagi ko k bharosha” live performance by Karna Das in Pokhara City.

Crowds of people attended the live performance by Karna Das after 10 years. He has been in Nepal just a month from USA. He sang most of his favourite songs. He sang Thula thula mahal haina…, Purano dunga…, Bistarai Chhayo…, Shanti Timi…, Naulakhe tara… Man manai man parai sakechhu… and so many popular songs and dedicated for mother, his wife and all couples, youths, national patrons and for all. The programme was organised by Lions Club of Adarsha  Chautari. He thanked to the organisers and every supporters and his special thanks for all the audience who loved him.

During his song, one of his fan saying I love you brother went to the stage and bowed down for his respect and in return Karna Das gave him a hug and promised with him saying I will be in Nepal in his request upon don’t leave Nepal.

The crowed sang the song together with him. “Jindagi ko k bharosha was his mother song” he said.

As the audience cheered and shouted once more, he introduced his elder song who sang with him together.

The programme was fully entertaining.

Are You Still Using That Slow, Old Typewriter?

Fagu Purnima- the festival of colors

Are You Still Using That Slow, Old Typewriter?

Fagu Purnima- the festival of colors 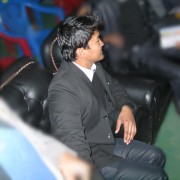